When most people think about geysers, they picture a Yellowstone- like hot spring where pressure from steam sends a tall column of water into the air. In Utah, however, several “geysers” erupt due to the same process that causes soda pop to shoot out of the can when you hold your finger over t

he lid and shake it. Although technically not true geysers, these cold-water eruptions look so much like hot-water geysers that they are referred to as “soda pop geysers.” In Utah, the largest of these is Crystal Geyser.

Crystal Geyser is a partially human-made geyser located on the shore of the Green River, approximately 10 miles south of the town of Green River, Utah. The geyser originated in 1936 when an oil exploration well tapped into a groundwater system under immense pressure caused by a reservoir of trapped carbon dioxide (CO2) gas. However, the high-pressure system that the well penetrated had previously created a series of ancient natural springs and tufa deposits which were first referenced by John Wesley Powell in 1869. On his way down from the present town site of Green River and the state park museum which now bears his name, he wrote, “an hour later, we run a long rapid, and stop at its foot to examine some curious rocks, deposited by mineral springs that at one time must have existed here, but are no longer flowing” (Powell, 1875, Report on the Exploration of the Colorado River of the West and Its Tributaries, p. 51–52).

Perhaps because of a geologic investigation published in 1914 that reported a series of oil seeps in the area, an exploratory oil well, the Ruby No. 1, was drilled in 1935 on the margin of the ancient spring deposits. In November of that year, a Moab newspaper reported on the progress of the well stating that a significant flow of water had been encountered at a depth of 44 feet. By January 1936, the newspaper reported that drillers had encountered CO2 gas at a depth of 360 feet at high enough pressures to shoot 105 pounds of drilling mud 60 feet into the air.

The well was abandoned after drilling to a total depth of 2627 feet, but in its aftermath, a geyser was created that quickly became a regional attraction. The November 1936 front page of Moab’s Times-Independent boasted of a new geyser that spouted an 80-foot column of water at regular intervals of about 15 minutes and a 150-foot column at intervals of about 9 hours.

The pressurized CO2 gas that drives Crystal Geyser is likely derived from rocks close in age to those that have produced much of the oil and natural gas in the adjoining Paradox Basin of southeastern Utah—an ancient sedimentary basin containing oil-producing shale and evaporite rocks deposited more than 250 million years ago. The gas migrated upward into the Jurassic-age Navajo and Entrada Sandstones, where it became trapped and pressurized. 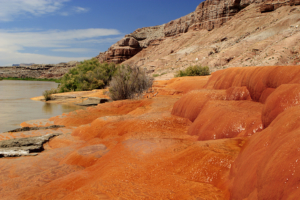 The Little Grand Wash fault, which runs in an east-west direction adjacent to Crystal Geyser, served as a barrier to the upward migration of gas in these geologic units, trapping it in an underground reservoir of permeable rock. Weakness in the fault also served as a conduit for fluids in this pressurized system to leak upward, creating carbonate-rich springs and oil seeps which early geologists reported in the immediate vicinity.

When the 1935 oil exploration company penetrated the cap on this gas reservoir, water from higher geologic units flowed down the hole to meet gas escaping from lower geologic units. The mixture of the gas and water continues between eruptions until a CO2 saturation point is reached. As soon as the water becomes oversaturated, the CO2 violently bursts out of solution and forcefully ejects the water from the borehole. Holes in the casing of the well allow much of the ejected water to flow back down the well and the whole process begins again.

Crystal Geyser is not the only CO2-driven geyser in this region of Utah. The same type of gas deposits in the northern Paradox Basin are responsible for several nearby springs and smaller but similar geysers around the town of Green River and Woodside. Other cold-water CO2 geysers are known in California, Germany, France, Serbia, Slovakia, and New Zealand. At its highest historically documented eruption of around 200 feet, Crystal Geyser is certainly one of the largest in the world.

In recent years, Crystal Geyser appears to be decreasing in both its height and reliable frequency of eruptions. Much of this was likely caused by visitors dropping rocks down the borehole, creating a significant plug less than 50 feet down. Plans to clear the major obstructions have never materialized. Plans have also been made, but never carried out, to pressure cap the geyser in a way that might increase the frequency or reliability of the eruptions.

Because major eruptions can often be more than 24 hours apart, and can often occur in the middle of the night, seeing them can be a difficult task and major time commitment. Studies carried out over the past two decades have used sensors to map the exact frequency and height of eruptions. These studies found that minor eruptions were somewhat unpredictable and ranged in height from 2 to 10 feet. Major eruptions attained heights of 40 to 80 feet and occurred on a schedule ranging from 17 to 27 hours apart. Eruption durations ranged from 3 to 49 minutes.

Crystal Geyser is a unique geologic feature that has fascinated tourists for decades. For those willing to wait around for its eruptions, Crystal Geyser can provide the unique experience of watching or even playing in one of the world’s few large cold-water geysers. 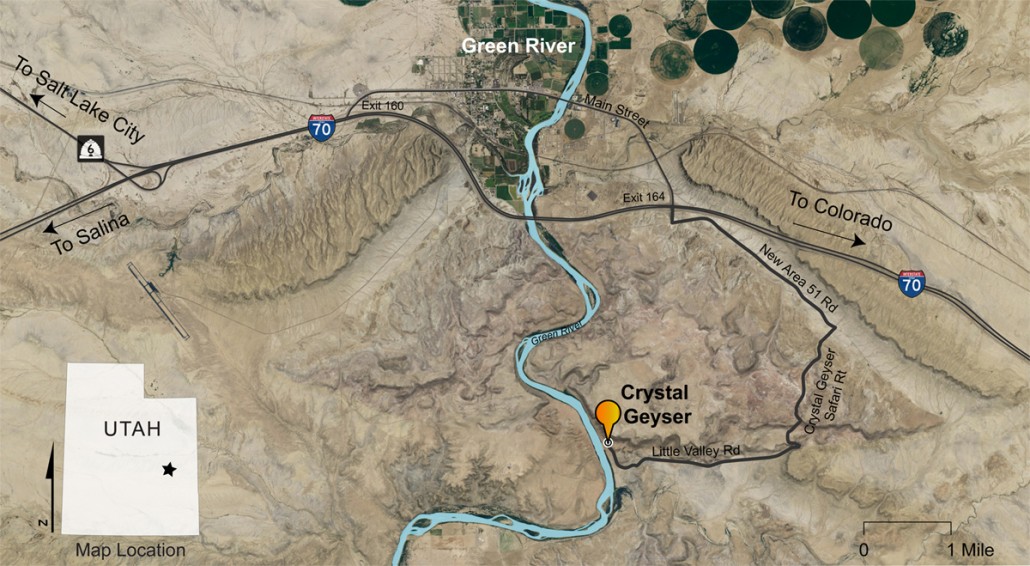 Access Crystal Geyser from I-70 exit 164, at the east end of the town of Green River, Utah. From there, head east for 2.4 miles on the frontage “New Area 51 Road” to the junction with “Crystal Geyser Safari Route.” Follow this well-graded dirt road south then west for 4 miles until arriving at a parking lot adjacent to both Crystal Geyser and the Green River boat access. Warning: Roads may be impassable in wet weather or winter conditions.

The Geology of Zion National Park