You are here: Home1 / Uncategorized2 / The Vishnu Schist 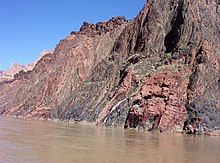 The Vishnu schist is part of the Vishnu complex in the exposed basement rocks of the Grand Canyon region. This metamorphic layer was formed by the intrusion of plutonic masses from under the crust and the deposit of sediment from an eroded mountain chain.

The oldest rocks in the Vishnu complex are deposits of hornblende and quartz that were laid down around 1.8 billion years ago. These rocks were originally part of a deep ocean trench, and they were subsequently overlain by sediments now known as the Brahma schist, which was laid down 1.75 billion years ago. Within a few million years of the Brahma schist deposit, volcanic activity added the felsic rock of the Rama schist. Together, these layers comprise the Vishnu schist that serves as the basement of the entire Grand Canyon area.

Schist is a metamorphic rock type that is commonly formed by the pressure of overlying sediments over a period of millions of years. The rocks of the Vishnu schist are typical of their type, having elongated minerals that can easily be separated into flakes. Some igneous rock is present in the Vishnu complex, though it represents an intrusion that took place considerably later than the original sediment deposits.

The oldest rocks within the Grand Canyon are exposed within Granite Gorge aria are characteristically dark somber gray. They respond to erosion to form a steep-walled V-shaped gorge (Text-fig. 56) through which the Colorado River flows from Mile 77 downstream to beyond Phantom Ranch, These (lark colored rocks are evidence of extensive deformation, during which they were subjected to intense heat and pressure and the effects of fluids and gases. The original sedimentary or volcanic characters have been extensively modified and in some cases obliterated. Early Precambrian rocks are not stratified but possess a planar structure known as foliation, resulting from reorientation of platy minerals, crystals, and grains in response to deformation. Foliation throughout most of Granite Gorge is nearly vertical which contrasts with the horizontal stratification of the overlying younger rocks.

Three major rock bodies are found within the Early Precambrian complex. The first encountered on the river trip consists of metamorphosed sedimentary rocks in which some relict. sedimentary structures are preserved. This body of baked and altered rocks is known as the Vishnu Schist and is exposed downstream beyond Hance Rapids to near Zoroaster Canyon. They represent part of the older rocks of the earths crust. Very little detailed information can be gained about their environment of deposition since the original character of the rock has been nearly completely obliterated.

Downstream from Zoroaster Canyon is a sequence of metamorphic rocks which differ in composition, color, and texture from the Vishnu Schist but superficially appear similar to it because of their degree of metamorphism, These rocks are known as the Brahma Schist and probably represent metamorphosed volcanic rocks. Numerous granitic dikes have intruded into both the Vishnu and Brahma schists. Most of these dikes are nearly vertical and parallel to foliation of the schists and stand out in marked contrast to the metamorphic material. Rocks of the dikes are characteristically pink, light colored, and composed of large interlocking crystals of feldspar and quartz, many of which are over a foot in diameter. These intrusions become very numerous in many areas and in some localities make up more than 50 percent of the rock body. Near Zoroaster Canyon dikes are particularly common and one large massive intrusion is dissected by the canyon.

Large granite bodies of the Inner Gorge are referred to as the Zoroaster Granite and represent a period of igneous activity after deposition and metamorphism of both the Brahma and Vishnu Schists but before deposition of the overlying Grand Canyon Series and Paleozoic formations.

The Vishnu Schist in the upper part of the gorge contains many pink pegmatite dikes. Many units within the schist are well foliated and may appear similar to a gneiss. Locally, relict bedding can be seen indicating a sedimentary origin. Foliation is nearly vertical. The gray-green walls of the Vishnu Schist are crisscrossed by dikes of granite. The ragged, ledgy, V-shaped character of the inner gorge is evidenced downstream.

The Granite Gorge Metamorphic Suite consists of lithologic units, the Brahma, Rama, and Vishnu schists, that have been mapped within the Upper, Middle, and Lower Granite Gorges of the Grand Canyon. The Vishnu Schist consists of quartz–mica schist, pelitic schist, and meta-arenites. They exhibit relict sedimentary structures and textures that demonstrate that they are metamorphosed submarine sedimentary rocks. The Brahma Schist consists of amphibolite, hornblende–biotite–plagioclase schist, biotite-plagioclase schist, orthoamphibole-bearing schist and gneiss, and metamorphosed sulfide deposits. As inferred from relict structures and textures, the Brahma Schist is composed of mafic to felsic-composition metavolcanic rocks. The Rama Schist consists of massive, fine-grained quartzofeldspathic schist and gneiss that likely are probable felsic metavolcanic rocks. On the basis of the presence of relict pillow structures, interlayering of metavolcanic strata, and the large volumes of metavolcanic rocks, the Brahma and Rama schists are interpreted to consist of metamorphosed, volcanic island-arc and associated submarine volcanic rocks. These metavolcanic rocks are locally overlain by the metamorphosed submarine sedimentary rocks of the Vishnu Schist that are interpreted to have accumulated in oceanic trenches. These metasedimentary rocks were originally composed of particles of quartz, clay, and volcanic rock fragments that have become metamorphosed into various schists. The Vishnu Schist exhibits relict graded beddingand structures indicative of turbidite deposits that accumulated in oceanic trenches and other relatively deep-marine settings. The Brahma Schist has been dated to about 1.75 billion years ago. The felsic metavolcanic rocks that comprise the Rama Schist have yielded an age of 1.742 billion years ago

The oldest rocks that are part of the Vishnu Basement Rocks is the Elves Chasm pluton. It consists of metamorphosed mafic (hornblende-biotite tonalite) and intermediate-composition plutonic rocks (quartz diorite). Within it, there are tabular amphibolite bodies that might be dikes, that have been dated at about 1.84 billion years ago. It is regarded to be an older granodioritic pluton that was exposed by erosion prior to being buried by the original volcanic and submarine sedimentary rocks of the Granite Gorge Metamorphic Suite. The Elves Chasm pluton is likely part of the basement rocks on which the original volcanic rocks and sediments of the Granite Gorge Metamorphic Suite were deposited.

The highly tectonized contact between Elves Chasm pluton and the Granite Gorge Metamorphic Suite is exposed near Waltenberg Canyon, in 115-Mile Canyon, near Blacktail Canyon, and in the Middle Granite Gorge. This contact is characterized by a high-grade orthoamphibole-bearing gneiss. This gneiss is interpreted to be a highly metamorphosed and sheared paleosol and associated regolith that originally consisted of several meters of weathered rock debris eroded from older plutonic rocks.

The Virgin River Narrows (how far is it? geology of?)