You are here: Home1 / Geologic Hiking Guides2 / The Geology of Zion National Park 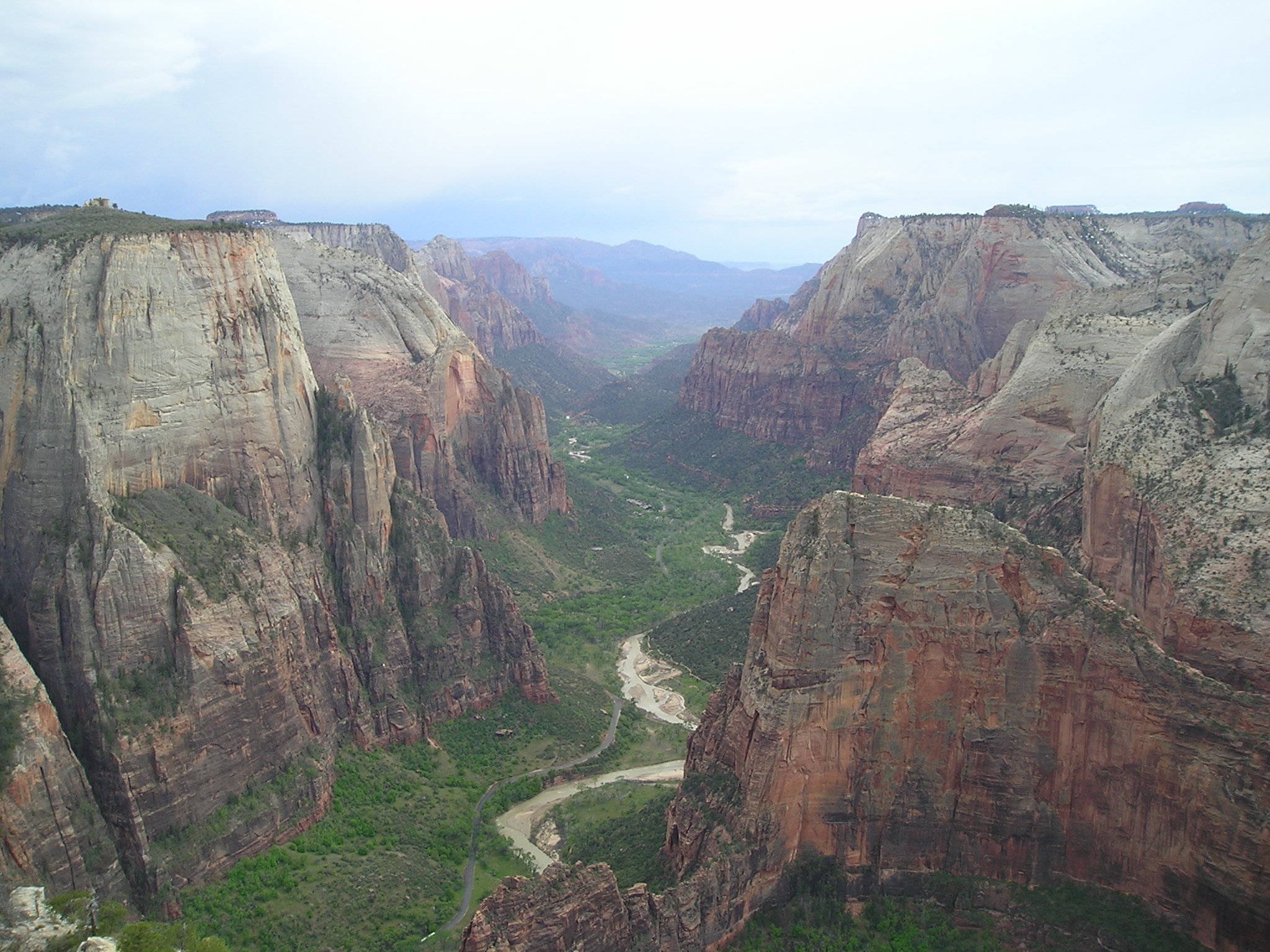 Although the geology of the Zion National Park includes nine known exposed formations, Zion is predominately the result of one spectacular unit, the Navajo Sandstone. Zion’s formations represent about 150 million years of mostly Mesozoic-aged sedimentation in a large ancient Jurassic basin. The Navajo is part of a super-sequence of rock units called the Grand Staircase, the time exposed in the Zion and Kolob area were deposited in several different environments that range from the warm shallow seas of the Kaibab and Moenkopi formations, streams and lakes of the Chinle, Moenave, and Kayenta formations to the large deserts of the Navajo and Temple Cap formations and dry near shore environments of the Carmel Formation.

Subsequent uplift of the Colorado Plateau slowly raised these formations much higher than where they were deposited (near & at sea-level). This steepened the stream gradient of the ancestral rivers and other streams on the plateau. The faster-moving streams took advantage of uplift-created joints in the rocks to cut gorges into the plateau. Zion Canyon was cut predominately by the North Fork of the Virgin River and its tributaries. Lava flows and cinder cones covered parts of the area during the later part of this process.

Zion National Park includes an elevated plateau that consists of sedimentary formations that dip very gently to the east. This means that the oldest strata are exposed along the Virgin River in the Zion Canyon part of the park, and the youngest are exposed in the Kolob Canyons section and moreso on the Makagunt Plateau to the north (Cedar Mountain). The plateau is bounded on the east by the Sevier Fault Zone, and on the west by the Hurricane Fault Zone. Weathering and erosion along north-trending faults and fractures influence the formation of landscape features, such as canyons, in this region.

Approximately 190 to 136 million years ago in the Jurassic the Colorado Plateau area’s climate increasingly became arid until 150,000 square miles (388,000 km²) of western North America became a huge desert, not unlike the modern Sahara. For perhaps 10 million years sometime around 175 million years ago sand dunes  accumulated, reaching their greatest thickness in the Zion Canyon area; about 2,200 feet (670 m) at the Temple of Sinawava in Zion Canyon.

Most of the sand, made of 98% translucent, rounded-grain quartz, was transported from coastal sand dunes to the west, in what is now central Nevada. Today the Navajo Sandstone is a geographically widespread, pale tan to red cliff and monolith former with very obvious sand dune cross-bedding patterns . Typically the lower part of this remarkably homogeneous formation is reddish from iron oxide that percolated from the overlaying iron-rich Temple Cap formation while the upper part of the formation is a pale tan to nearly white color. The other component of the Navajo’s weak cement matrix is calcium carbonate, but the resulting sandstone is friable (crumbles easily) and very porous. Cross-bedding is especially evident in the eastern part of the park where Jurassic wind directions changed often. The crosshatched appearance of Checkerboard Mesa is a good example .

Springs, such as Weeping Rock, form in canyon walls made of the porous Navajo Sandstone when water hits and is channeled by the underlying non-porous Kayenta Formation. The principal aquifer in the region is contained in Navajo Sandstone. Navajo is the most prominent formation exposed in Zion Canyon with the highest exposures being West Temple and Checkerboard Mesa. The monoliths in the sides of Zion Canyon are among the tallest sandstone cliffs in the world.

The Temple cap formation is the thin redish sandstone unit which caps many of the major spires in Zion National Park. Utah and western Colorado were deformed as the rate of subduction off the west coast increased in the Middle Jurassic Sevier Orogeny. At the same time, an inland sea began to encroach on the continent from the north. Broad tidal flats and streams carrying iron oxide-rich mud formed on the margins of the shallow sea to the west, creating the Sinawava member of the Temple Cap Formation. Flat-bedded sandstones, siltstones, and limestones filled depressions left in the underlying eroded strata. Streams eroded the poorly cemented Navajo Sandstone, and water caused the sand to slump.

Desert conditions returned briefly, creating the White Throne member, but encroaching seas again beveled the coastline, forming a regional unconformity. Thin beds of clay and silt mark the end of this formation. The most prominent outcrops of this formation make up the capstone of West Temple in Zion Canyon. Rain dissolves some of the iron oxide and thus streaks Zion’s cliffs red (the red streak seen on the Altar of Sacrifice is a famous example). Temple Cap iron oxide is also the source of the red-orange color of much the lower half of the Navajo Formation 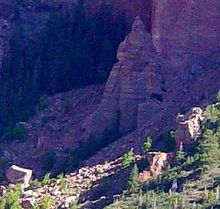 Although the units that form Zion are ancient in geologic terms. It’s erosion and canyon formation is fairly recent. Stream downcutting continued along with canyon-forming processes such as mass wasting; sediment-rich and abrasive flood stage waters would undermine cliffs until vertical slabs of rock sheared away. This process continues to be especially efficient with the vertically jointed Navajo Sandstone.

All erosion types took advantage of preexisting weaknesses in the rock such as rock type, amount of lithification, and the presence of cracks or joints in the rock. Basalt flows concentrated in valleys but subsequent erosion removed sedimentary rock that once stood at higher elevations. The resulting inverted relief consists of ridges capped by basalt which are separated by adjacent drainages.

In all about 6,000 feet (1,800 m) of sediment were removed from atop the youngest exposed formation in the park (the Late Cretaceous-aged Dakota Sandstone). The Virgin River carved out 1,300 feet (400 m) of sediment in about 1 million years. This is a very high rate of downcutting, about the same rate as occurred in Grand Canyon during its most rapid period of erosion. About 1 million years ago, Zion Canyon was only about half as deep as it is today in the vicinity of Zion Lodge.Assuming that erosion was fairly constant over the past 2 million years, then the upper half of Zion Canyon was carved between about 1 and 2 million years ago and only the upper half of the Great White Throne was exposed 1 million years ago and The Narrows were yet to form.

Downcutting and canyon widening continue today as the process of erosion continues to try to reduce the topography to sea level. In 1998 a flash flood temporarily increased the Virgin River’s flow rate from 200 to 4,500 ft³/s (6 to 125 m³/s). Geologists estimate that the Virgin River can cut another thousand feet (300 m) before it loses the ability to transport sediment to the Colorado River to the south. However, additional uplift will probably increase this figure.

Utah’s Not So Old Faithful, Crystal Geyser
Scroll to top